The most common complaint in patients diagnosed with De Quervain’s Syndrome is radial sided wrist pain and tenderness, in the area of the first dorsal compartment of the extensor retinaculum. This compartment contains the Extensor Pollicis Brevis (EPB) and Abductor Pollicis Longus (APL) tendons. In this syndrome, hypertrophy of the retinaculum and thickening of the synovium has been noted.

Forceful, prolonged and/or repetitive thumb abduction and ulnar deviation – motions involved in many functional activities – may contribute to the syndrome. Pregnant women and mothers of young babies often are vulnerable. 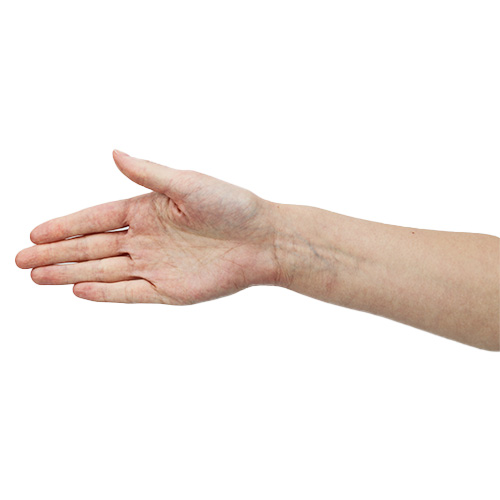 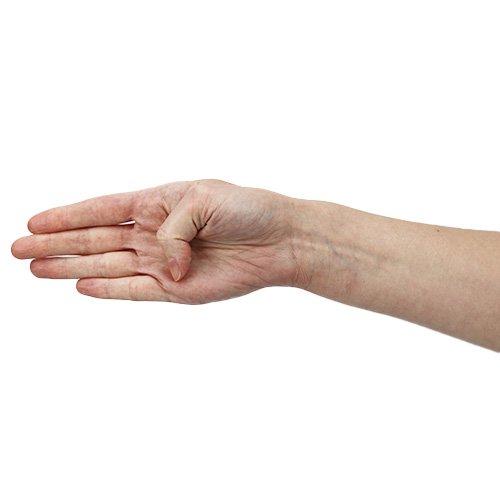 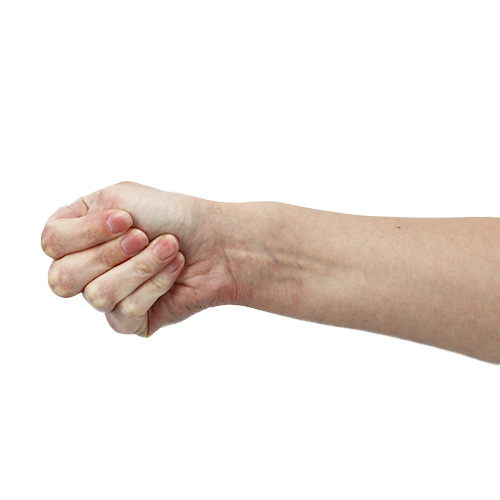 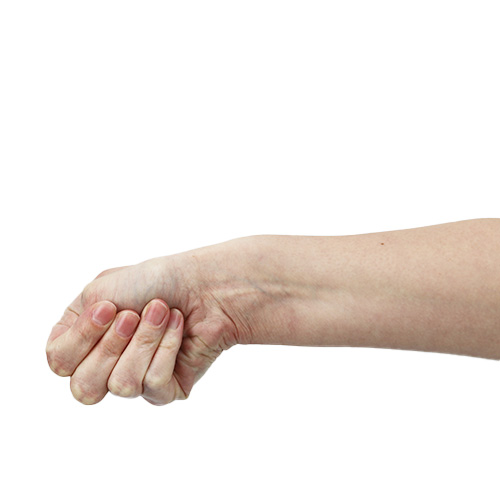 The Finkelstein Test typically elicits pain to the radial styloid.

Conservative management of the De Quervain’s Syndrome typically includes activity modifications and orthotic wear. There appear to be more studies showing some degree of evidence to support the use and benefit of orthoses and/or immobilization to reduce symptoms.

A consensus study published by the European Hand Guide study in 2014 indicated that patient education, splinting/orthoses, NSAID’s and injections were all key components of the conservative management of this diagnosis.

The combined treatment approach had a significantly higher success rate than injections alone, meaning that patients had no more pain at the radial wrist, less tenderness in the first dorsal compartment area and a negative Finkelstein test after 3 weeks of treatment. The thumb spica cast may seem a bit aggressive for those who prefer the use of orthoses, but the main goal was to immobilize the involved tendons and limit the use of wrist and hand.

The authors compared hand therapy treatments (defined as therapeutic exercise, manual therapy, patient education, electrophysical agents, and also acupuncture and dry needling) combined with injections versus injections or hand therapy alone. The combined treatment approach appears to be more effective than any individual treatment on its own.

A study by Nemati and colleagues from Iran (2016) compared two different orthoses for management of symptoms in twenty-four women with acute De Quervain’s Syndrome: a long opponens orthosis versus a hinged version of the long opponens orthosis that permitted wrist extension and flexion, but blocked radial and ulnar deviation. 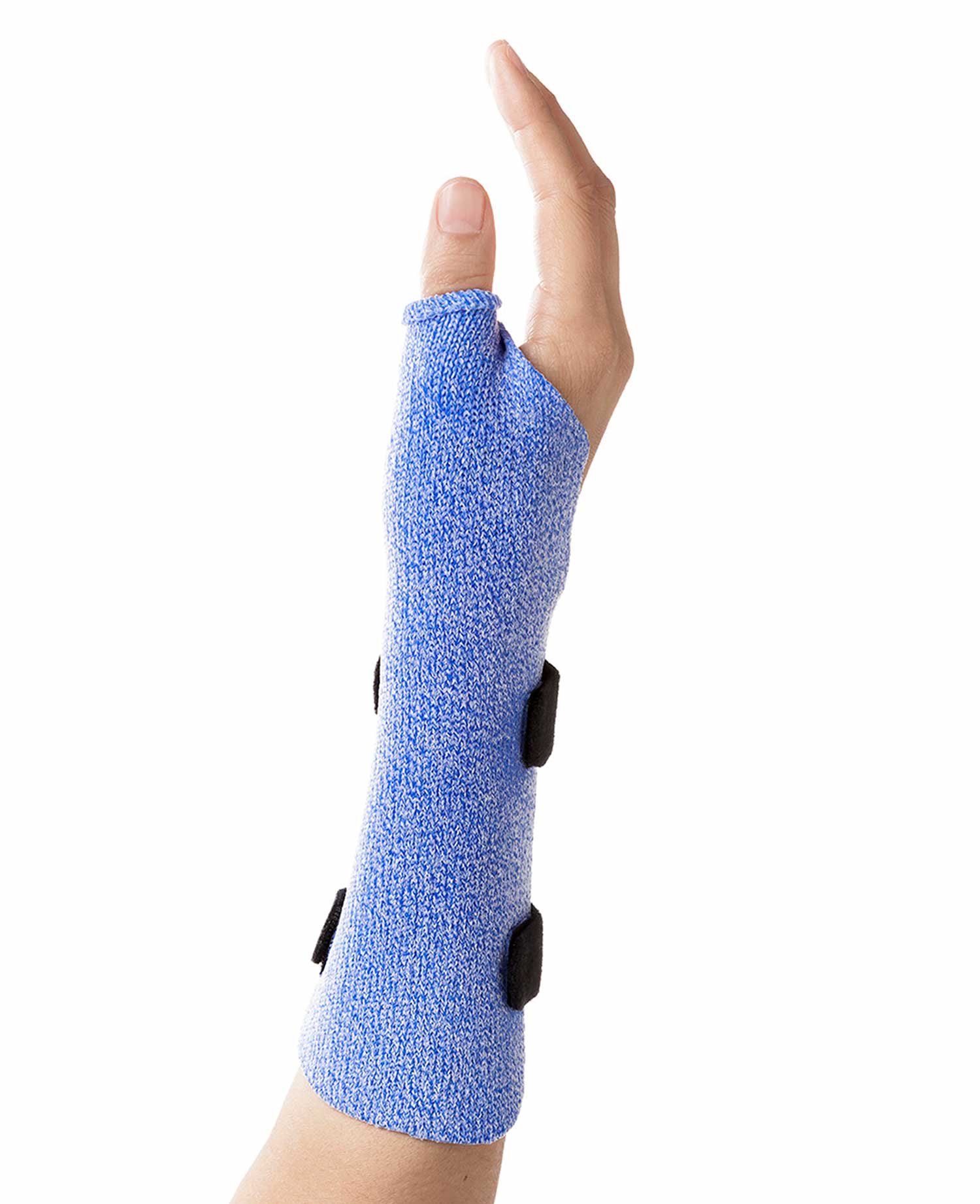 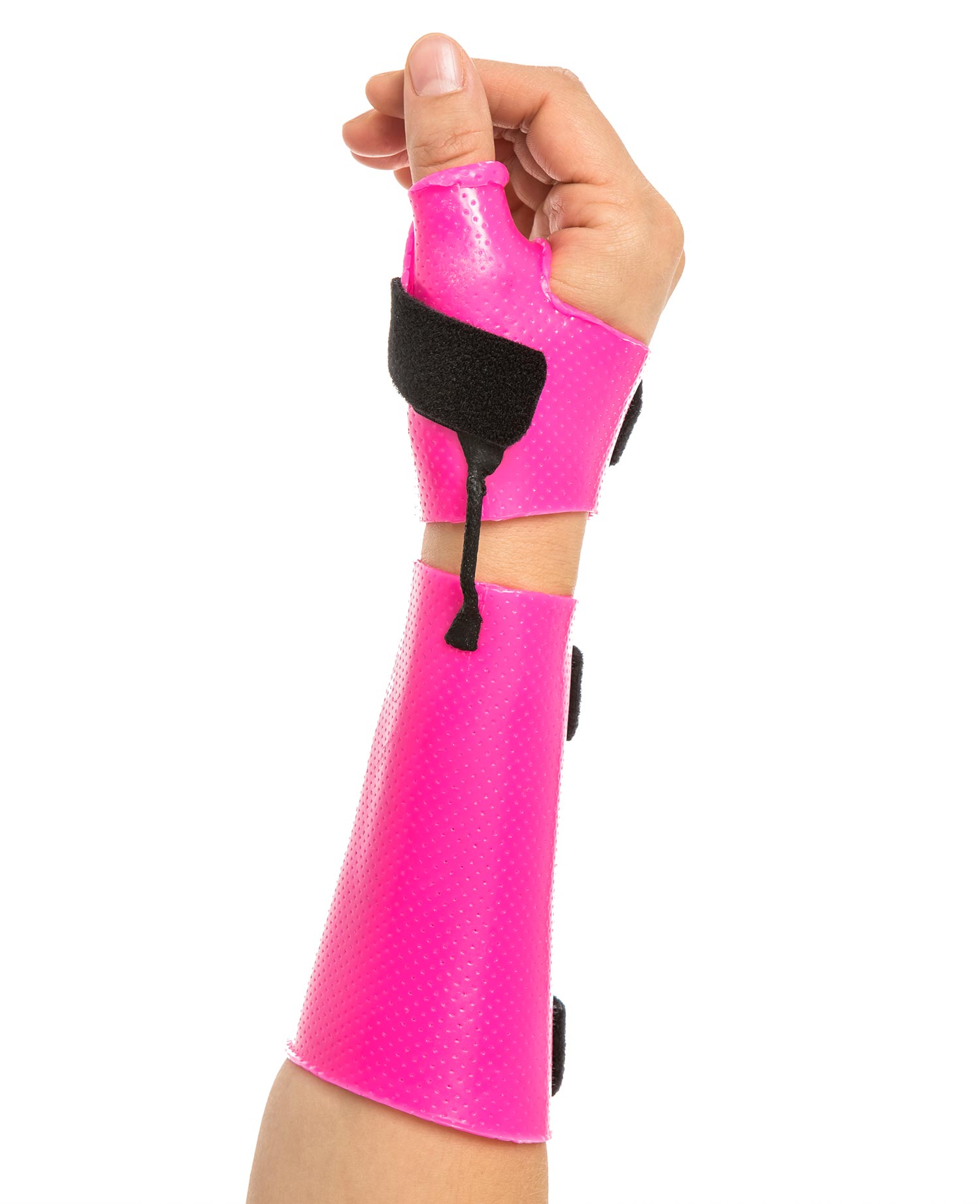 Although the testing period for this study was relatively short (2 weeks), all patients demonstrated decreased pain and increased strength and function. However, the group using the hinged orthosis demonstrated a significantly increased VAS (visual analogue scale) on a 100 point satisfaction scale for the treatment.

How to fabricate a hinged long opponens orthosis

The study did not include any fabrication instructions of the orthosis that was utilized, but we did want to give the hinged design a try. Instead of the wings and a rivet, we chose to use rolled Orficast as thermoplastic hinges.

Step 1:  Starting with the Orfit Colors NS pre-cut for immobilization of the thumb and wrist, make a long opponens orthosis and apply straps. 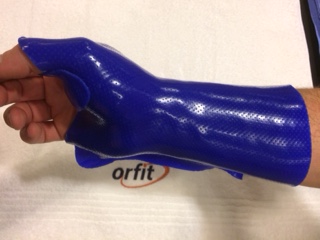 Step 2: Mark the wrist axis of motion and cut the orthosis into two parts. 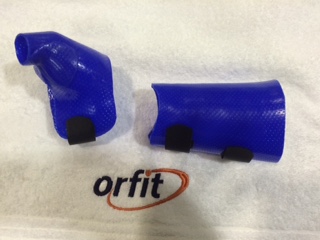 Cut the orthosis into two parts

Step 3: Using two rolled pieces of Orficast as hinges, reattach the two parts along the radial border and ulnar borders. 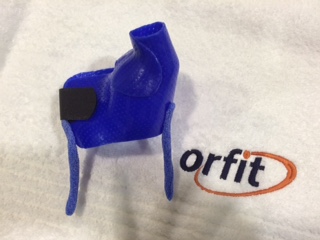 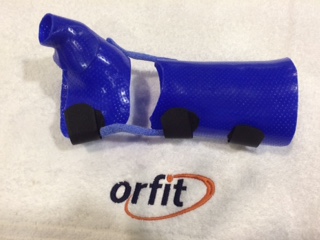 Reattach the two parts on the radial and ulnar sides

Step 4: The patient was able to flex and extend the wrist in the orthosis, but was unable to move radially and/or ulnarly. This ability to move the wrist in a limited way allows for increased hand function. Therefore patients are more likely to be satisfied and hopefully more compliant with orthotic wear. Blocking radial and ulnar deviation prevents increasing tension on the already aggravated tendons of the EPB and APL. 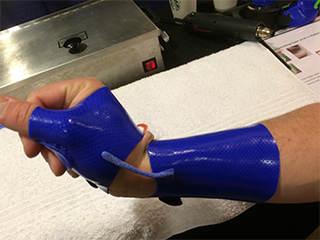 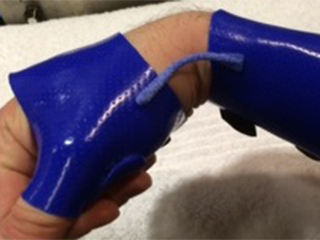 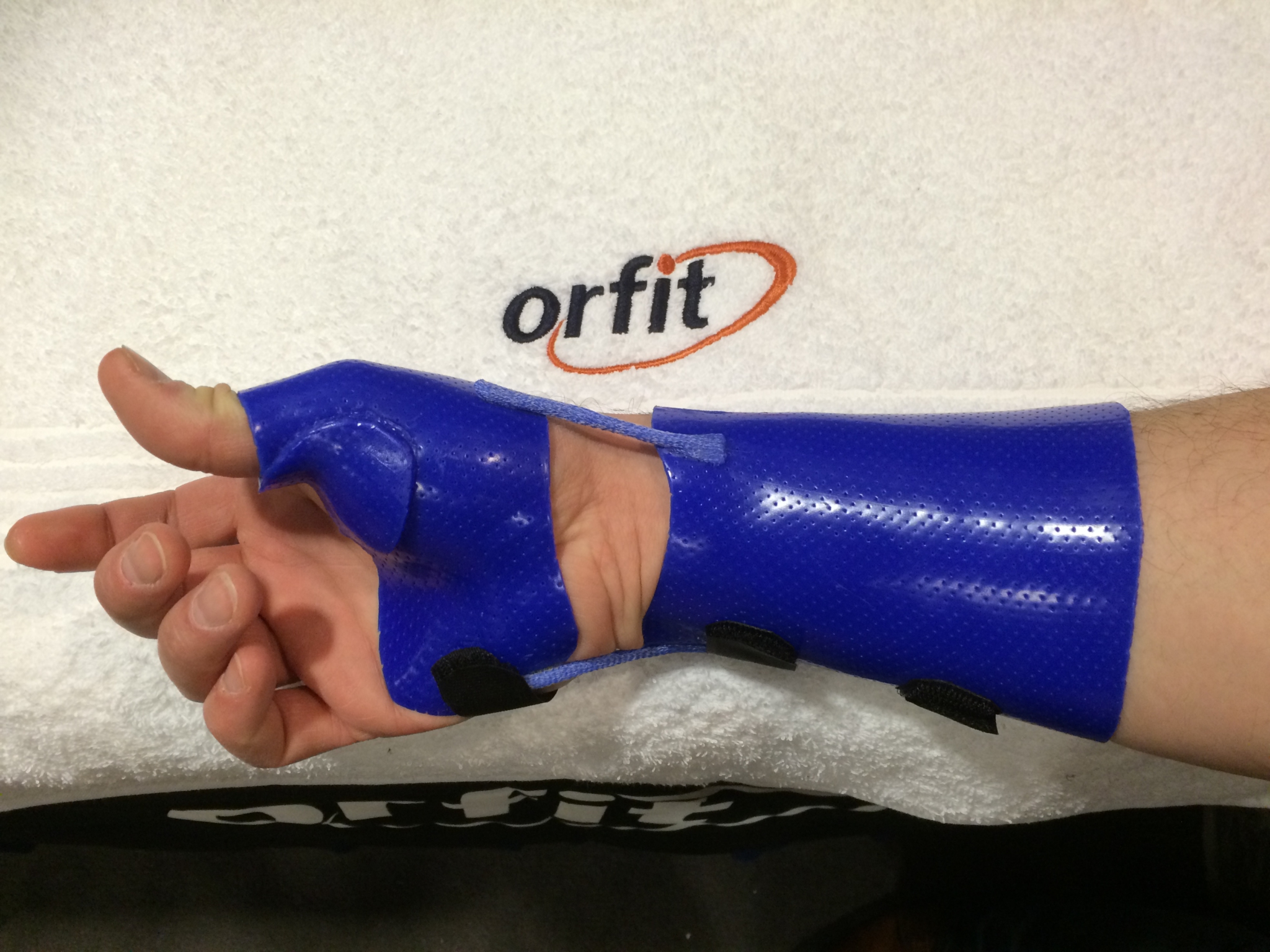 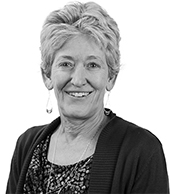 Debby is a certified hand therapist with over 36 years of clinical experience. She completed her Doctorate of Occupational Therapy at Rocky Mountain University of Health Professions in 2010. She has worked at Orfit Industries America as Product and Educational Specialist since 2007.

Debby is also an adjunct professor at the Occupational Therapy Department of Touro University, School of Health Sciences, and at the Occupational Therapy Department at Yeshiva University, Katz School of Science and Health in NYC. She has written many book chapters in the field of hand therapy and multiple articles for hand therapy journals, including the ASHT Times and the Journal of Hand Therapy. She has published a new textbook on orthotic fabrication together with Dr. Katherine Schofield, entitled “Orthotic Design and Fabrication for the Upper Extremity: A Practical Guide”.

Featured in this article

ORFICAST THERMOPLASTIC MATERIAL ON A ROLL

Orficast is a unique thermoplastic orthotic fabrication material on a roll. It offers extreme comfort for your patients and is very easy to use.
View product

February 10, 2021
Musicians may experience different types of repetitive strain or overuse injuries. Some may even have to stop playing their beloved instrument due to these issues. Fortunately, there are a number of ways in which therapists can help musicians, including orthotic fabrication.
Read more

July 4, 2019
When we think about summer, we think about refreshing pool parties, exciting beach trips and long, warm evenings. These activities are all great fun but may bring some challenges to those who need to wear an orthosis. Now that summer is in full swing, we like to share our top tips for keeping your orthoses summer-proof.
Read more

February 11, 2019
If you find yourself fabricating the same type of orthosis over and over again, you should check out Orfit pre-cuts.
Read more
View all