Reliability and stability – two pillars of safe and effective immobilization for proton/photon therapy. Characteristics that were of the highest importance to us when we designed the Orfit HP PRO – our proton compatible immobilization solution.

A series of extensive clinical tests by MAASTRO Clinic (Maastricht, The Netherlands), has now further confirmed the reliability and stability of the HP PRO.

The Orfit HP PRO Solution is an immobilization device designed for brain, head, and neck proton therapy. As it is a versatile system, it lends itself perfectly to photon therapy as well.

The system has been designed to meet the specific standards that proton therapy demands. It includes a homogeneous low-density immobilization device with a narrow carbon fiber base plate in the head and neck area. Because of its ingenious design, it allows for close range positions of the treatment device.

In addition, the HP PRO System uses the ultra-stable Nanor masks for guaranteed comfort and stability. This innovative thermoplastic material makes use of nanotechnology for improved mechanical properties.

Learn more about the Orfit HP PRO system on orfit.com/proton.

MAASTRO Clinic recently did extensive testing on the Orfit HP PRO as a setup for proton head and neck treatments.

The clinic has been using the Orfit HP PRO system since September 2018 and they apply it for both photon and proton therapy.

The first set-up consisted of the following components:

The second set-up consisted of the following components:

In both set-up analyses, MAASTRO used extra CBCT imaging before and after treatment to identify residual error and intrafraction movement.

In the head and neck set-up, they applied 6D offline matches of 23 patients in total to determine the margins in lateral (x), longitudinal (y), and vertical (z) direction. They found that a PTV margin of 1 mm is achievable to treat neuro patients with the HP PRO immobilization system, extended with a biteblock.

In the head, neck and shoulders set-up, they applied 4D offline matches of 17 patients to determine the margins in lateral (x), longitudinal (y), and vertical (z) direction. For this set-up, MAASTRO found that a margin of 3 mm CTV-PTV is suitable to treat the H&N patient.

In conclusion, MAASTRO’s findings suggest that the HP PRO system is indeed a reliable and stable system, resulting in small margins for CTV-PTV.

>> Review MAASTRO’s complete findings on the HP PRO’s efficacy in these slides: 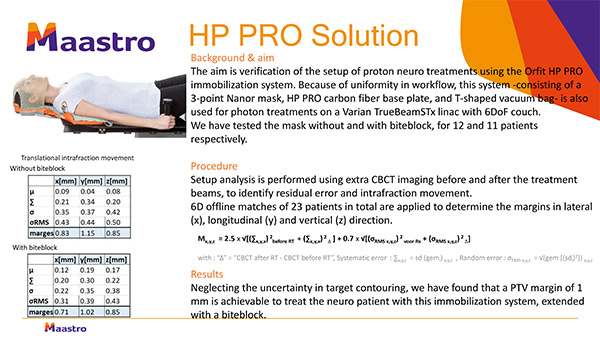 Rob has over 10 years of experience as a Radiation Therapist in a clinical and research environment.

He provides product education in Dutch Radiation Oncology Centres and gives input and support to the Orfit R&D and Sales and Marketing team.

April 14, 2022
A cancer diagnosis can be scary and overwhelming. That's why supporting patient comfort during the treatment process is such an important component in delivering high-quality cancer care. We discuss three ways providers can deliver maximum patient comfort.
Read more
View all